Front: Spruce with a well-recognized rosette of the maker

Condition: The condition is excellent. The table has no cracks.

Francisco Simplicio was one of the most important Spanish makers of the first half of the 20th century. Actually, he is the only student and successor to Enrique Garcia. He worked in both Madrid and later, Barcelona.

Curiously, it is when he lost his job as an expert cabinet maker with the firm of Masriera y Vidal of Barcelona, that Simplicio began in 1919 his guitar making career with Enrique Garcia.

So, at that time, Simplicio had acquired for 18 years the skills of woodworking.

When Enrique Garcia his master instructor passed away in 1922, Francisco Simplicio became the owner of the famous shop. Then he started rising as one of the top makers in the industry, his fame came to the top. He won the prestigious prize at the International Exposition of Barcelona, Spain.

So, he made about 34 guitars per year.

Even if his son Miguel and his daughter Josefa helped him, it is an important rate of production.

The back and ribs of this Francisco Simplicio 1926 guitar are in Cuban mahogany, the table is in spruce.

Therefore, the tone of this guitar is soft, velvet-like, clarity in the trebles. The response is immediate and the projection is huge.

This guitar is numbered 103. It is labeled, signed and dated by the maker. The machine heads are original and work well.

The sound is particularly magnificent, charming and deep, with a big bottom-end and lyrical trebles. This is among the better-sounding Simplicio’s I have ever hear. 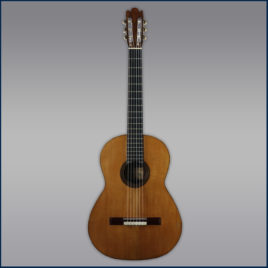 Guitar made by Enrique Garcia in 1901 Year: 1901 – number 9. Labelled, signed, addressed and dated by the maker. Body: South american rosewood of uncertain species, with fine, double-line purflings and characteristic, rounded heelcap. Front: European spruce with a well-recognised rosette of the maker, slim double-line purflings, rosewood bridge with mother-of-pearl tie-block framing. The front has the maker's often-used assymetrical 8 fan-strut design. There is a brass tornavoz in the soundhole. Tuners: Original Scale: 650mm with 19 frets on the ebony fingerboard. Neck Width: 50 mm at the nut Weight: 1360 grams Condition: The condition is very good; the front particularly. The head, neck, sides and front are in really excellent condition for its 116 years. The back which is Brazilian, has several cracks - which are tight closed. At some stage decades ago, the back has been taken off to effect back crack repair. The table has several cracks which have been perfectly restored Price: Inquire
not rated Read more 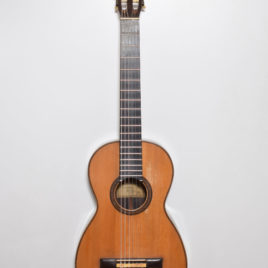 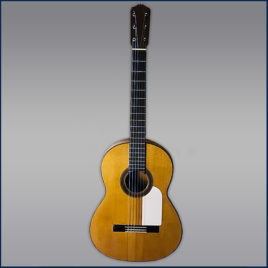 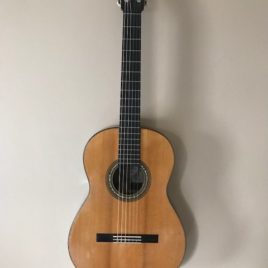